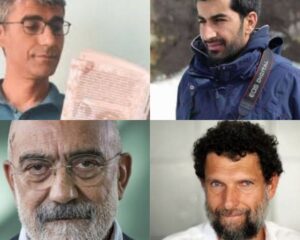 End persecution and imprisonment of writers in Turkey

I am writing to you as part of a coordinated call by Scottish PEN and Wales PEN Cymru to end the imprisonment of writers in Turkey, including Ahmet Altan, Ilhan Sami Çomak, Osman Kavala and Nedim Türfent, among others.

I have joined activists around the world in marking the Day of the Imprisoned Writer on 15 November and call on you to respond to the urgent crisis these writers face. No artist should face imprisonment for their work. These writers now face additional risks to their health and mental wellbeing as COVID-19 continues to spread. Turkey’s prisons were already notorious for human rights abuses, overcrowding and unsanitary conditions before the pandemic, and as Turkey is an epicentre of the pandemic in the Middle East (with over 382,000 cases confirmed by WHO) concerns for their safety are heightened.

For writers, poets and playwrights, a culture of censorship, surveillance, long jail sentences and ineffective legal recourse is widespread in Turkey. In the case of Kurdish poet Ilhan Sami Çomak, who has served 26 years of a life sentence, the possibility of justice being served feels particularly out of reach. I call on you to make representations to the Turkish government to free him as soon as possible. In the case of Osman Kavala, the Council of Europe Committee of Ministers ordered on 3rd September 2020 that the Turkish authorities “ensure the applicant’s immediate release,”. So far, that order has been denied.

Journalists Ahmet Altan and Nedim Türfent face trumped-up terrorism charges and long prison sentences aimed at silencing their attempts to report transparently on the issues faced by people in Turkey. Turkey ranks in 154th place of 180 countries on the World Press Freedom Index, and is the world’s biggest jailer of professional journalists. The unjust cases of these two men are important, but far from unique.

These writers have garnered international support from PEN centres and human rights campaigners around the world. Their voices will never be silenced.

Freedom of expression is an internationally recognised human right that you have a duty to uphold. I urge you to investigate the cases of these writers further, advocate on their behalf and issue the details of your actions accordingly.

I look forward to receiving your response.

Turkey’s Ambassador to the UK