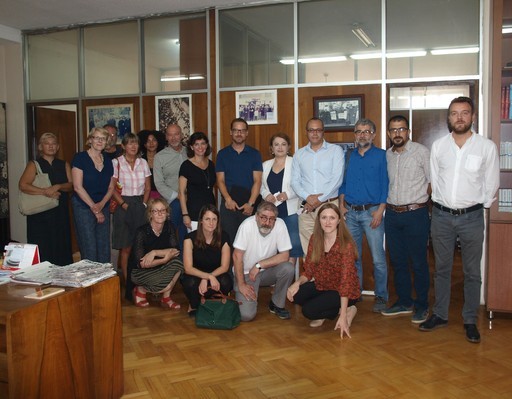 Chair of the Translation, Linguistic Rights and Writers in Prison Committee of Wales PEN Cymru, Turkish translator Caroline Stockford took part in a fact-finding mission to Istanbul from the 31st of August to the 2nd of September to report on the state of freedom of the press and to witness the trial of Tafaf Newspaper Editor Ahmet Altan, reporters Yasemin Çongar, Mehmed Baransu and former Editor Yıldıray Oğur.

Meetings with newspapers, television stations and the Turkish Union of Journalists

During the week we met with opposition and independent newspapers such as Evrensel, Birgün and Cumhuriyet.

The general opinion is that the situation for journalism and freedom of the press in Turkey is going to get a lot worse.  Press cards are being cancelled and permits to attend Government press briefings are being denied to opposition newspapers.  Kurdish reporters in the South East are being told by police that it is illegal to report under the State of Emergency.  Evrensel newspaper told us that two of their journalists Cemil Ugur and Halil Ibrahim Polat had been arrested on the 23rd of August in the province of Mardin and held in custody for eight days with no access to legal representation.

Under the SOE members of the public suspected of having taken part in the coup, or of having Gülenist sympathies are being arrested and detained for up to 30 days with no legal advice for the first 5 days.  It is widely believed that the SOE is being abused in order to purge society of writers, thinkers and journalists that are critical of the administration.  Forty thousand prisoners in Turkish jails have been scheduled for early parole to make way for those arrested under suspicion of playing a part in the failed coup.  These suspects include writers and journalists, academics and civil servants.

We also visited two television stations, IMC TV and Hayatın Sesi.  The former reported that their cable broadcast licence had been cancelled due to their showing an interview they had conducted with a member of the outlawed PKK.  This is despite state-run stations broadcasting similar interviews.  IMC TV report from a humanitarian, ecological and gender balanced point of view and, like other independent television stations such as Hayatın Sesi, they face constant fines for having potentially ‘insulted the President’ or for broadcasting from the sites of suicide bombings in Turkey seconds after a blanket-broadcast ban had been introduced by the television regulating authority.

At least 15 journalists were arrested and detained during the four-day mission of our delegation which was led by Article 19 and representatives from Danish PEN, the European Federation of Journalists, German PEN, Index on Censorship, My Media, the Norwegian Press Association, the Norwegian Union of Journalists, Norwegian PEN, PEN International, Reporters Without Borders, and Caroline Stockford, Chair of the Translation, Linguistic Rights and Writers in Prison Committee of Wales PEN Cymru.

Arrest and detention of leading female writers, journalists and linguists

When the Kuridsh newspaper Özgür Gündem was under threat in the SE of the country, a group of 68 journalists went to Diyarbakır over a period of 8 weeks to work for the newspaper and show solidarity.

This is taken from Hürriyet Daily News, 25th August:

Aslı Erdoğan was a member of daily Özgür Gündem’s advisory board and columnist, is being held in solitary confinement and says she has been unable to get her necessary medicine for five days.

“They are treating me in a way that will leave permanent damage on my body,” she told daily Cumhuriyet through her lawyer, Nesrullah Oğuz, adding that she is forced to sleep in a bed that someone previously urinated in.

“I’ve been experiencing problems in my intestines for 10 years. My pancreas and digestive system doesn’t work properly, but my medicine has not been given to me for five days. I am diabetic and I need a special nutrition. But in jail I am only able to eat yoghurt … Also, even though I suffer from asthma and chronic obstructive pulmonary disease, I have not been allowed access to open air [since entering prison],” Erdoğan said.

There appears to be a danger of being accused of ‘affiliation with a terrorist organisation’ in Turkey at present for many who try to assist Kurdish causes or the call for peace talks and cessation of military activity in the SE of Turkey.

Another board member of the newspaper Özgür Gündem, Necmiye Alpay who is a writer and philologist in her seventies was arrested and remanded in custody at Bakırköy prison on 31st August.  She is being charged with spreading propaganda regarding a terrorist organsiation and ‘disrupting the unity of the state’  In their statement on the 9th of September, 2016 PEN International said the following:

PEN International is deeply concerned by the arrest of renowned writer and linguist Necmiye Alpay on 31 August on terror charges as a part of an ongoing investigation into closed daily Özgür Gündem, which has also seen writer Aslı Erdoğan detained.

On 31 August, Istanbul’s Eighth Criminal Court of Peace ordered the arrest of Alpay on charges of being a member of a terror organization and disrupting the unity of the state; she denies all charges against her. PEN believes that Alpay is being held solely for her peaceful exercise of her right to freedom of expression and is calling for her immediate and unconditional release.

Wales PEN Cymru joined Danish PEN, German PEN, Norwegian PEN, Turkish PEN and over 200 others, including many Turkish writers and poets to demonstrate against the arrests of Aslı Erdoğan and Necmiye Alpay outside Bakırköy women’s prison on Friday 2nd September. 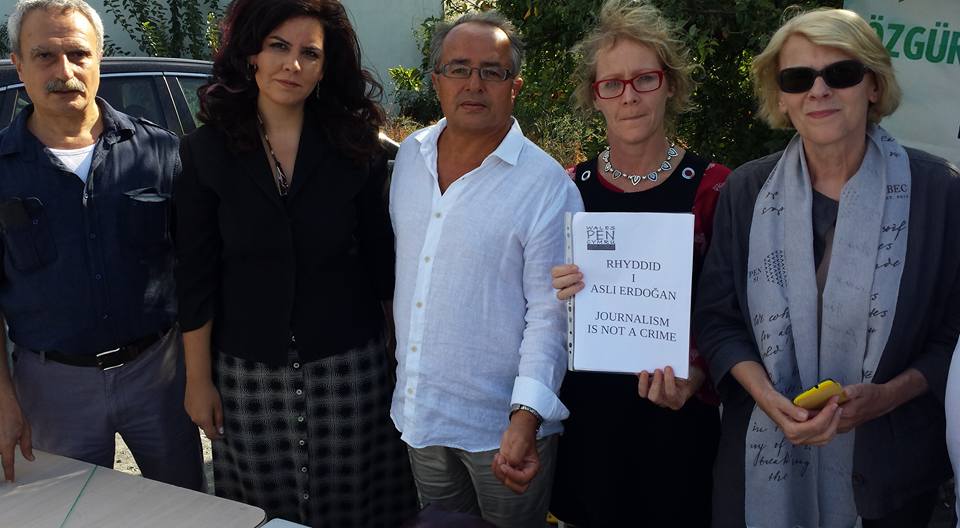 There were speeches, performances of poetry and theatre and several leading literary figures as well as the members of PEN Turkey expressed their gratitude to Wales PEN Cymru for their presence and solidarity.

Members writing in Welsh may send their messages to Wales PEN Cymru directly via Turkishinterpreterwales@gmail.com and have them sent on in Welsh and Turkish to both Necmiye Alpay and Aslı Erdoğan.

Observing the Taraf trial at the High Criminal Court, Istanbul

Wales PEN Cymru was among other PEN Centres, Embassies and Press Organisations in court to witness the Taraf Newspaper trial where Editor Ahmet Altan, reporters Yasemin Çongar, Mehmed Baransu and former Editor Yıldıray Oğur were before the three judges accused of having divulged state secrets in relation to a coup plot six years ago.

The case proceeded despite the fact that a new and unsigned indictment appeared to have been produced overnight and not submitted to defence.  The 246 page indictment the defence had received contained 45 pages copied and pasted from the indictment of Cumhuriyet Editor in Chief Can Dündar whose trial took place in 2015.  The words, ‘the defendant Can Dündar’ appeared on several pages of the indictment against the Taraf journalists.  New charges had been brought against the defendants accusing them of having a role in the most recent failed coup, of spying and of attempting to bring down the state.

At the end of the day’s hearing, a new date was set for the 23rd of November and the defendants (all but Mehmed Baransu who has been in custody for several years) were released.

Following this, on Saturday, September 10th, defendant Ahmet Altan and his brother Dr Mehmet Altan were both arrested and detained on charges of ‘giving subliminal messages to incite a coup’ in a television programme on which they appeared on the 14th of July 2016.

Wales PEN Cymru are deeply concerned that the State of Emergency and anti-terror laws in Turkey are being used indiscriminately to imprison outspoken writers, journalists and academics and to stifle freedom of speech in the country.

Below is a short message from co-defendant and journalist Yasemin Çongar regarding the Altan brothers:

The most critical 24 hours for Ahmet and Mehmet Altan

Thank you all for supporting our demand for the release of Ahmet and Mehmet Altan.

After 11 days in police custody where they did not see the sky, had only two small cans of food for the whole day, no tea, no coffee, no cigarettes, limited drinking water, no access to family, no tv, no papers, no lights out –they had to sleep in a brightly-lit room behind bars– they will be questioned by the police for the first time today. Then they will see the prosecutor and in all likelihood will be referred to the court with a demand for pre-trial imprisonment, which might mean months if not years in today’s Turkey.

Anything you can do in the next 24 hours –getting more people to sign the support letter as well as social media messages with hashtags #AhmetAltan #MehmetAltan and #LetAltansGoFree or, more importantly, any public statements you can make or help organise — will mean a lot.

We would urge you, as our members, to send us your ideas on campaigns of solidarity that we might run to assist Turkish journalists and writers at this difficult period in the history of Turkey.

Thank you for your ongoing support of Wales PEN Cymru.